Here’s my final post for our Ilocos Adventure. Took me almost a month to blog about it, but heck at least I made time for it. 🙂 We woke up super early, since we slept at 9 pm. E and I decided to have coffee outside and enjoy the view. A few steps away from our room you can see the Windmills and it was very visible because the skies were clear.

Night before while we were looking for a place to have dinner I found a resto that has breakfast meals for P100. So after taking photos we started our way to the resto. We spent P150 per person we had our chosen breakfast meal + cup noodles and soda.

Our first destination was the Bangui Windmills – but Kuya Rene made a pit stop at the Pagudpud Arch so that we can take photos. After that we went to the Windmills! Those windmills are big ass ones, seriously! The wind blew so hard, and the waves were so big! We had fun taking photos there and we even bought mini windmills that we can take home with us. 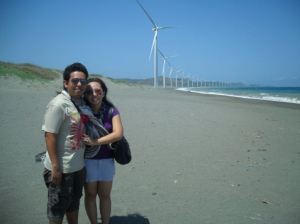 E and I at the Windmills of Bangui

With our Mini Windmills 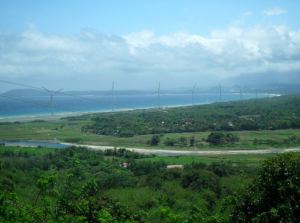 After the windmills, we went to Cape Bojeador or the Light House. It’s a tourist spot and you can climb up the light house, kinda scary to go up there though, but it was alright. 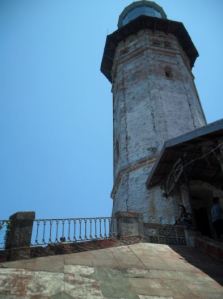 Our last stop was the Kapurpurawan Rock Formation. The waves hitting the rocks helped form the rock formation, our tryke/tour guides mentioned that before people were allowed to walk closer to the rock formation. However, because of the strong beach waves it was banned for safety precautions. Better safe than sorry. 🙂 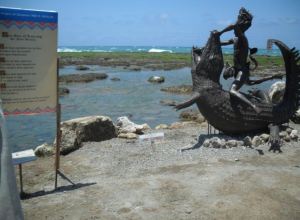 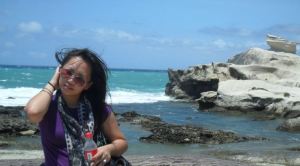 At the Rock Formation

After that we went back to Laoag, our tryke/tour guides were so nice. They got us seats from this diner so we could relax while they wait for buses that we can ride back to Laoag.

I seriously thought that our tour was over but when we were walking around Laoag, we were able to stop by the sinking bell tower. 🙂 Our bus left around 7 PM and we arrived in Manila at 3 AM. That’s it for our Ilocos Adventure, next up I’ll blog about my Boracay trip and then my other travel plans for the rest of the year. 🙂

First Time Mom. Social Lead. Trying to go to as many places as I can with my fam-bam.
View all posts by den »
« Ilocos Day 2 Part 2: Lovely Pagudpud
Scandal »

solving one shitty problem at a time